What’s in my mouth?

I visited Toronto a couple of weeks ago and was interested in trying Tinuno. It had come up in my web search and my friends S and J had only good things to say so when M and I were exploring dinner options, it was just a short jaunt and we found ourselves at their doorstep.

This place is small with a rough-and-tumble first impression but was also packed on a Tuesday night at 6:30 pm. I spoke to the server in Filipino (which I hope helped) as we did not have a reservation. We had to wait about 10-15 minutes and kept an eye out for the table we were waiting for and were eventually able to snag a table.

We tried their $15/person kamayan experience. Kamayan or eating a meal with one’s hands seems to be making Tinuno trendy as many of the patrons that night were not Filipino.

The washrooms are in an odd spot, but both M and I decided we would wash up and go full-on kamayan rather than use the food gloves that were offered. 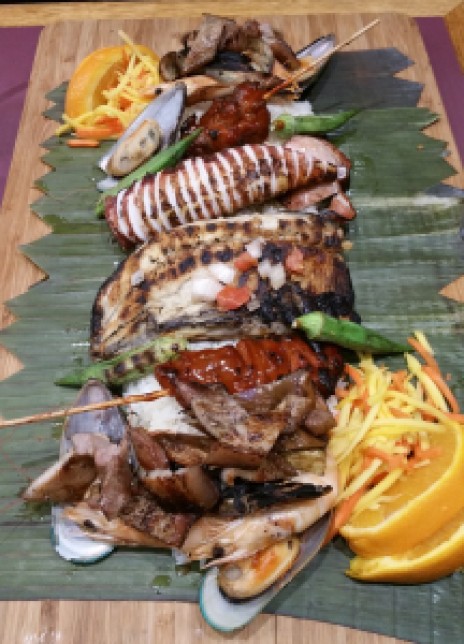 Service was quick and proteins were plenty. It included pork bbq and pork belly, mussels, shrimp, bangus, and grilled squid. Taking a cue from M, I also used one of my empty mussel shells for the vinegar dipping sauce instead of needing a dish. It seemed fitting to the kamayan experience. The eggplant and okra were good additions for me as they are vegetables I actually eat! In case it cannot be seen in the picture, I should say there was a layer of garlic rice underneath all of the ulam and Tinuno offered more rice mid-way through the meal with no additional charge. The only thing I found a bit off was the mango and carrots. They did not seem pickled or seasoned at all and therefore did not seem to mesh together other than being raw and julienned. I just ate the mango. The orange slices were a good palette cleanser and a nice way to end the feast.

Tinuno was busy the entire time we were there, which was easily over an hour, but we never felt rushed and ended our dinner at our pace and with a full stomach.

‘Tinuno’ – TO COOK BY DIRECT / EXTREME HEAT; UNDER A GRILL OR OVER A HOT FIRE.

Business partners Cathy Ortega & Gerald Aquintey didn’t know what to expect after finally opening up a Filipino small grocery & take-out joint together. The shop was doing great but they wanted to do more. They wanted to give Toronto a much more authentic Filipino taste and experience without the price of a flight to the Philippines. Kamayan/Boodle Fight (the formality of eating with your hands) was the obvious solution.